Cision's State of the Media report 2019

The past 12 months have been challenging for the media industry. Members of the press have contended with personal attacks, accusations of “fake news”, and the rapid spread of misinformation. Social media has been particularly difficult to work with this year, with complex updates to data privacy laws and sudden changes in newsfeed algorithms

However, amidst this formidable environment, there’s a glimmer of hope; trust in the media might actually be on the rise.

According to Cision’s 2019 State of the Media survey, which collected responses from 1,999 journalists in 10 countries, relevance and trust are more important than ever.

Responses reflect growing concerns around the changing role of social media, an increasing reliance on data-driven storytelling, and positive shifts in perceptions of trust.

In this fragmented, dynamic media environment, communications and PR professionals have an opportunity to become even more reliable partners with their media counterparts.

The goal of journalism in 2019 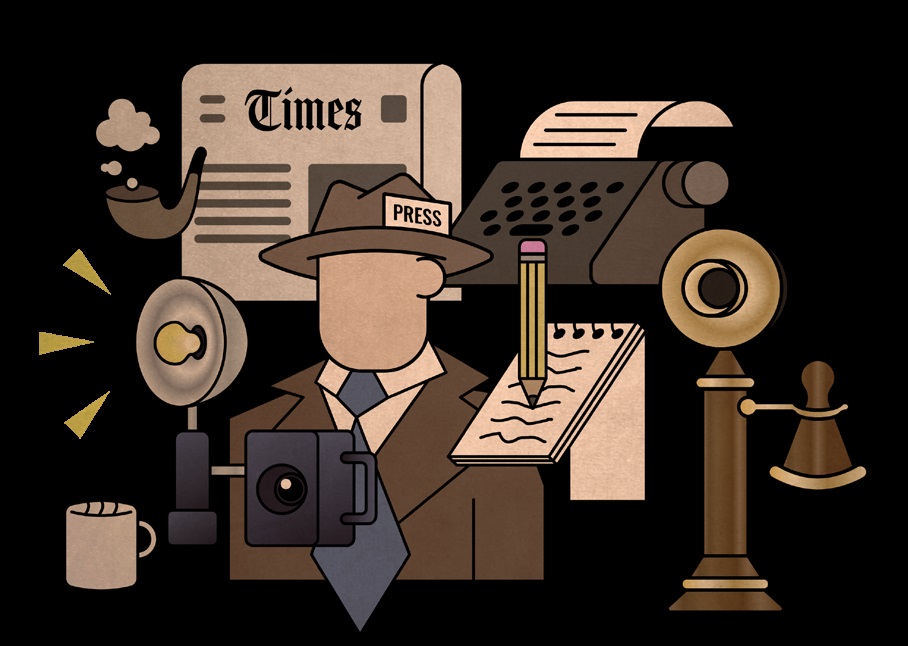 While journalism ethics has long been a topic of discussion in the UK, particularly at the height of the phone hacking scandal, scrutiny and pressure on journalists has never been greater than in 2019.

Today, journalism is under attack from many sides—from world leaders decrying “fake news” to sophisticated misinformation campaigns, to newsroom budget cuts and opaque newsfeed algorithms. Has this impacted the goals of journalism? What exactly is the role of the media in the face of such adversity?

Cision’s 2019 State of the Media survey explored those questions to understand the role of truth and trust in the business of journalism.  According to Edelman’s 2019 Trust Barometer, roughly half the public population does not trust the media.

Trust in the media

The results of Cision’s 2019 survey are eye-opening. Journalists are split over whether accuracy or revenue is more important to their publications.

Media organisations have recently taken a stand to improve public perception of their trustworthiness. The Times has offered school pupils lessons in how to spot “fake news”, while Time Magazine named “The Guardians” (a group of journalists whose lives were targeted) its 2018 Person of the Year

The constant attacks on the media have had an interesting impact; many people are paying more attention to what journalists do and the value they provide. Edelman reports a “massive rise in news engagement” this year.

Reporting the truth is more important than ever. The purpose of journalism has not changed, but it has evolved. The goal of journalism in 2019 is to provide coverage so informative and reliable that people around the world are willing to pay for it .Trust has become a business model.

What is most important for your organisation?

5% = Being the first to publish

The goal of journalists in 2019

A lot goes into publishing a story.  Journalists investigate potential stories, conduct interviews, and perform research well before they put words on a page.  Now with access to more data than ever before, journalists are using analytics to create more impactful stories.

In 2019, journalists say they will be focusing even more on truly understanding their audiences to create more relevant, engaging stories.

Cision’s State of the Media survey found that 65% of journalists feel the availability of detailed audience metrics have changed the way they evaluate stories, with only 11% reporting no change. Facing pressure to drive readership, engagement and revenue, journalists are making data-driven decisions about the content they publish.

Question: Do you think the availability of audience metrics like views and engagement has changed the way journalists evaluate stories?

​The biggest threats to journalism

From financial risks to constitutional threats—even legitimate concerns about journalists’ physical safety—journalism is under attack. This survey sought to uncover what journalists themselves feel is the most pressing challenge of modern-day journalism.  Are the constant “fake news” accusations a greater threat than lack of resources, or do social networks pose the greatest risk? And how worried are they about their personal safety?

When the general public was asked about trust in Edelman’s 2019 Trust Barometer, 47% of people said they trust the media (which is actually up over 2018).  In the eyes of the public, traditional media is a more trusted source of news than social media. Somewhat ironically, the “fake news” era may have contributed to a more informed public—helping to restore the public’s trust in journalism.

Distrust in the media is decreasing.

The biggest challenges for journalism in the last 12 months 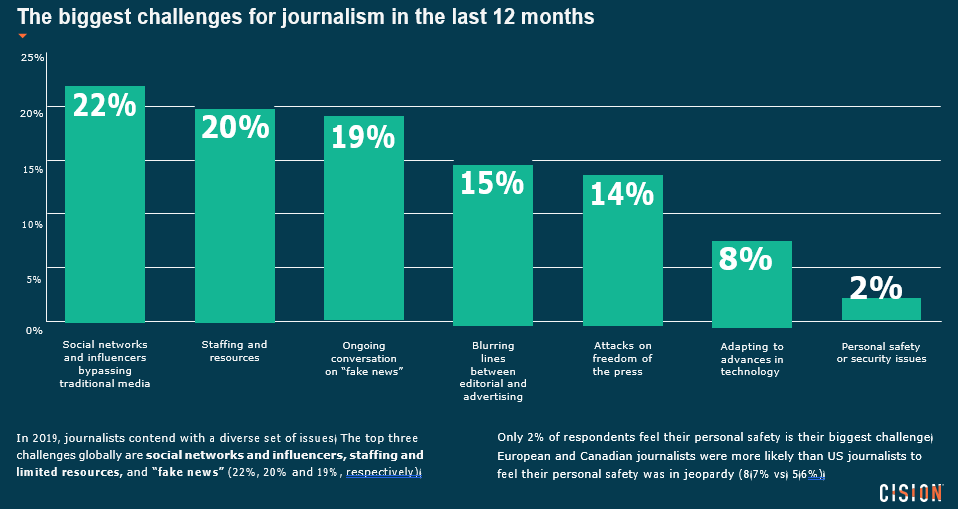 While the New York Times continues to surpass its lofty revenue goals and invest in newsroom operations, its financial success is not typical for the media industry. Newsroom employment continues to decline. According to Pew Research, one third of large newspapers and one fourth of digital- only outlets have suffered layoffs since 2017. For the second year in a row, access to resources is one of the biggest challenges in journalism.

To manage that workload, many journalists plan their stories in nearly real time; 42% of respondents work on stories no more than a day in advance.

For PR professionals, this means you need to be prepared with all materials and contacts when you pitch a time-sensitive story in case it will be written right away.

As one reporter said in this year’s survey, “Your pitch isn’t the only one we receive in a single day, so please have some patience.” 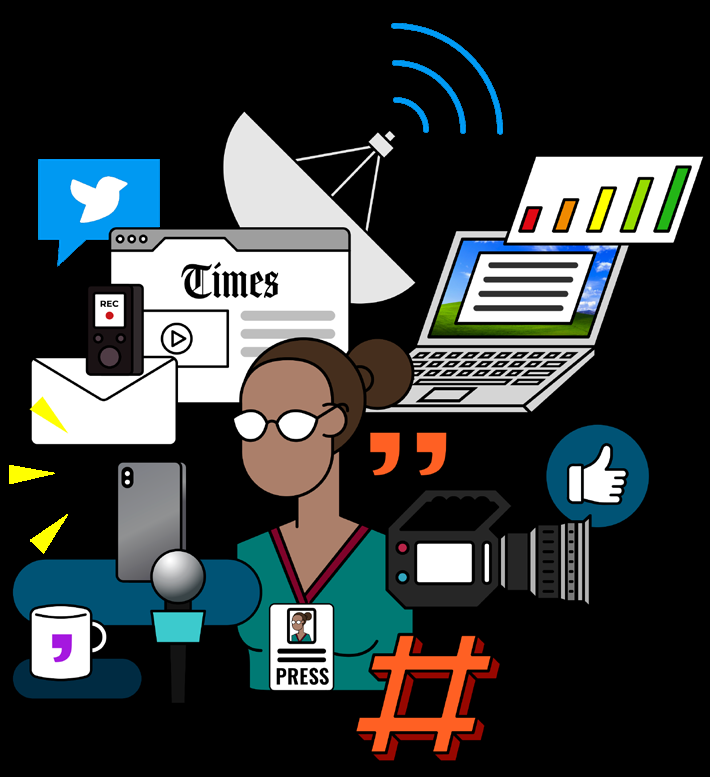 2018 was a rough year for social media and journalism. Facebook faced a number of challenges: from data privacy issues to concerns about the accuracy of their engagement metrics. Publishers realise they can’t rely on Facebook as a distribution platform the way they thought they could.

However, journalists still rely on social media to stay connected to sources and real-time news. Social data is also more important that ever, in helping determine which stories resonated. Journalism’s relationship with social media continues to get more complex.

As journalists struggle with resource limitations, PR professionals have been and will continue to be a valuable partner.

To cultivate a valuable relationship, it is important for PR professionals to provide trustworthy, relevant and useful content. When asked what type of content they want to receive from brands, 71% of journalists said news announcements and press releases (which has been the top answer for the past four years). Invitations to events and original research reports came in close after that.

And for non-branded content, journalists equally trust interviews, industry experts, and newswires (for press release distribution). Despite being more than a century old, the press release continues to be a journalistic staple. 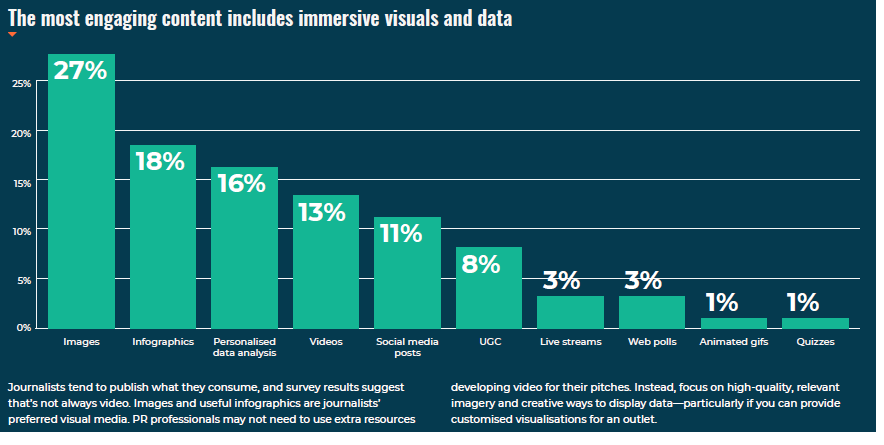 This was one of the most common themes in this year’s survey: Pitches need to be more relevant.

When asked how PR professionals can write more effective press releases, journalists universally agree that press releases should include more information that is relevant to their target audience.  They also recommended including a clear news hook and avoiding industry and marketing jargon.

Today’s media environment is fragmented, crowded and noisy; it’s more important than ever to write for the end consumer.  Content should be tailored for target audiences.  65% of journalists would rather receive customised press releases, than one mass-audience release.

Delivering more relevant pitches has a long lasting impact. As one respondent said, “If you haven’t taken a few minutes to understand what our publication covers, I’m less likely to open your next email.”

Take the time to work your media contacts list: know who is doing what, and who their target audience is. Tailor your pitches. Send us people who are going to enhance our shows, be interesting to our audience; that’s what we want. That’s what we need. – 2019 State of the Media Survey respondent

It’s been a tumultuous year for journalism, and that’s not likely to change anytime soon. Journalists are contending with fewer resources and a host of challenges, including receiving more PR pitches than ever. However, in spite of - and maybe even because of -these challenges, there are several signs that trust in the media may be on the rise, for the first time in a long time.

Journalists and PR professionals all work in the storytelling business,
and should work together to be valuable partners for each other given the increasing challenges facing the industry as a whole.

16% of journalists said they want PR professionals to stop spamming them.  Nearly everyone working in the public relations industry is a professional with the best interests of their brands and the media in mind, but a few bad actors can ruin things for everyone else.

To be a good partner to journalists, focus on being relevant and targeted with your outreach. Deliver clear and concise pitches, and be sure you’ve done your research before you engage journalists. Provide new information, backed up with data, images, and expert sources, and understand who your target audience is (and how to best reach them).

Cision conducted its 2019 State of the Media Survey between February 5–7, 2019. Surveys were emailed to Cision Media Database members, which are vetted by the company’s media research team to verify their positions as media professionals, influencers and bloggers. The survey was also available to media professionals in the PR Newswire for Journalists database.

Globally, 41% work in print (newspaper/magazine), 14% work in broadcast (TV/radio/podcast), 21% work for an online-only news outlet, 19% identified as individuals/personal bloggers/freelancers, and 5% work as a social media influencer. The survey language was translated and localised for each country and market and then the results were tallied together to form this global report. Unless otherwise specified, results in this report reflect global totals.