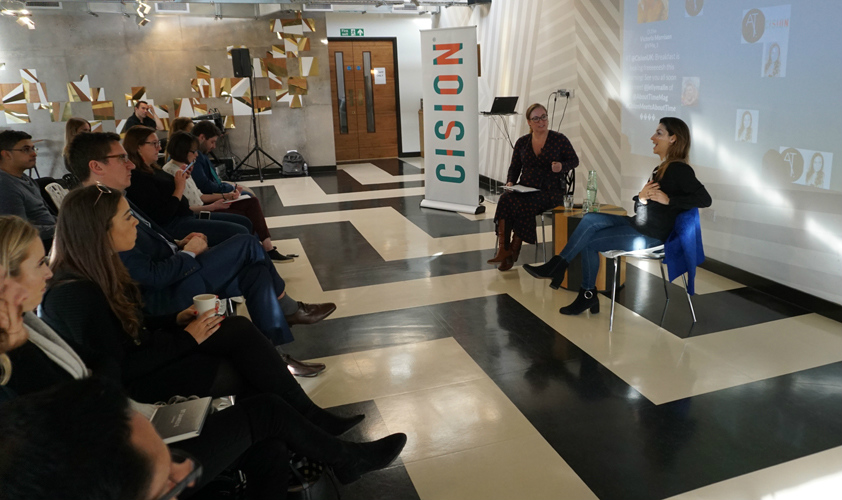 About Time magazine runs more stories based on PR pitches than other outlets, editor-in-chief Angelica Malin revealed at this morning’s CisionMeets media briefing.

Malin noted that the title’s small editorial team meant that they were able to turn around stories very quickly, often receiving pitches in the morning and producing a piece for the website by the afternoon.

“If we get something through in the morning which we think is a good story then we will run it at the drop of a hat,” she said. “The great thing about being small is that you’re nimble, I don’t need to go through someone else. We don’t have anything to stop us from being able to just run a feature.”

She added that the trend-based nature of the online magazine meant that while the team did not need a forward features plan, they make a note of key events at the start of the week which they’ll cover.

In front of a packed audience at The Trampery, Malin went on to discuss the best way to pitch stories to the team, consuming and knowing the website like a reader, its expanding number of events and the future of online media.

Do the work for journalists to obtain coverage

When it comes to pitches, Malin argued that the best pitches were the ones which did a lot of the work for her. She said that any PRs who were able to tailor a submission into a format used by the magazine were almost guaranteed to get coverage.

She explained: “If you send me information in one of our own formats then I can almost guarantee it will make it onto the website. That’s the way it works, we’re running at huge speed, it makes it a lot easier for us.”

Malin noted that a lot of the title’s formats were fairly consistent, meaning that PRs should be able to produce content which worked for the website quite easily. This rule extends to About Time’s interviews too.

“In some of our interview slots we ask the same questions the whole time,” Malin said. “A PR can say they’ve got a great client to suggest for an About Time slot, they’ll send them the questions we normally run with and we’ll say ‘that’s great, go for it’.”

Continuing on this theme, Malin stated that the best way that communicators would get coverage from the title was through knowing it like a reader would and where stories would work.

“We get somewhere between 200 and 300 press releases a day,” she noted. “It’s very hard for us to know where something sits on the site if you don’t know.”

She revealed that often when she receives story pitches, she can immediately tell whether a PR understands and is familiar with the magazine, or if “they’ve just seen our site and thought ‘that’s a good idea’” for a target outlet.

Malin added: “So I would think to yourself; before I pitch this in, do I know which section it goes in, which slot, who’s the journalist that writes that, rather than just sending a story and saying ‘I’ve got a story, do something with it’.”

About Time’s expansion of events

While the title is small, it is expanding in some areas, particularly when it comes to events. Malin announced that the team are setting separate platform called the About Time Academy, a full-service events company in London which is set to launch in two weeks.

She revealed that events were a huge source of excitement to the magazine’s readers, which was part of the reason they were setting up the new service. The events wing of About Time aims to run four or five gatherings a month and will operate as a separate entity while still tapping into the magazine core 24-35 female London-based demographic.

Malin encouraged audience members to get involved, noting that there were a number of PR opportunities which came with the events, from pitching speakers for panel events and author Q&As all the way through to sponsorship or a venue partnership.

Reflecting on the challenges online journalism has faced recently, Malin argued that it is the rise of influencers which has led to money flowing out of journalism.

She warned: “What I’ve seen happening is that brands who used to come to us wanting to do sponsored editorial and sponsored posts have changed their strategy because of influencers. Rather than going to publications as a kind of middle-man to the audience, they went directly to a social influencer and that’s where their budget is going.”

Malin noted that the magazine has innovated – with events as an example – to ensure that it had sources of revenue other than display advertising and sponsored content. However, she added that she believes that the influencer bubble which has driven revenue away from journalism is about to burst.

“Once everyone started to put #gift and #ad into their posts then so much of that belief in the whole thing just died,” she said. “What was the allure of Instagram and influencers is that you thought that their lives were so wonderful and so special, now we’re just seeing that they’ve been sent the stuff they’re wearing and being hosted in the places they’re going and that allure and glamour has gone.”

Click here to find out more about Cision events and media briefings.